The Golden Anniversary with the arts
(50 years of theatre)
De Luca waving to his audience during the concert at the New York Town Hall, November 7, 1947. 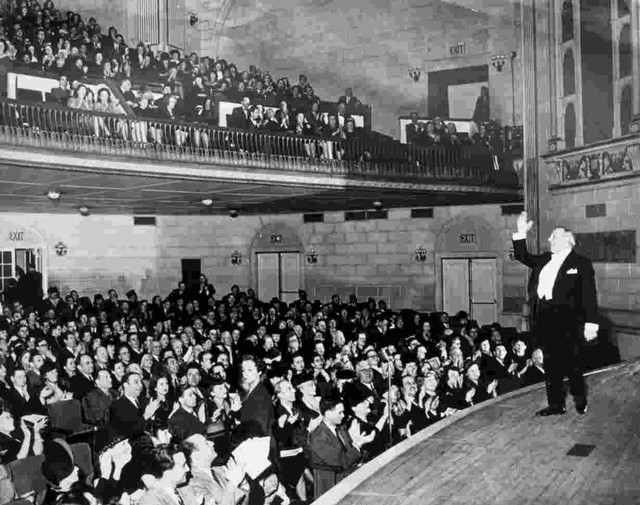 By: Nicoletta Panni
After a huge disappointment, Giuseppe Deluca decided to definitively cut off ties with Italy. He would have liked to celebrate his 50th anniversary in the arts in his hometown: Rome.
He asked to the artistic director at the time, Tullio Serafin, to fulfil his wish. In 1947, soon after the war had finished, my grandfather wanted to celebrate his 50 years of theatrical work by singing Faust's Dannazione. He loved this opera and derived much artistic satisfaction from it. In Italy he had already sung, in 1946 and in 1947, La Traviatta with Licia Albanese and Faust in concert. The Opera Theatre said that they would consider his request but months passed waiting in vain.  When he returned to speak in person with the director, he was told that it would not be possible to out on that opera because in was too difficult. My grandfather suggested choosing another from his vast repertoire but the cold response from the theatre manager forced him to back off. He was very let down and disappointed but worst of all, it was soon discovered that the theatre had advertised Faust's Dannazione to be sung by another baritone. For my grandfather it was a terrible blow. My mother said that for months he was assaulted by nightmares in his sleep. Right after this bitter disappointment he left for the United States as the first non-military passenger on the “Liberty” ship, leaving Italy.  When he arrived he found his friends and his fans, he himself said,  …it was like drinking a glass of champagne and coming back to life.”
He had many friends, especially among the musicians. I have a wonderful memory of Warren's Rigoletto at he Metropolitan. I went with my grandfather in his changing room at the end of the opera and in all the confusion you couldn't understand if the fans wanted to ask for De Lucas's autograph or Warren's. I also could never forget that my grandfather was always recognised on the street, in the subway even in restaurants. They asked for autographs, and all of the famous restaurants had his photographs; he was very well known. He celebrated his 50th anniversary in the arts by performing a memorable concert in the Town Hall. 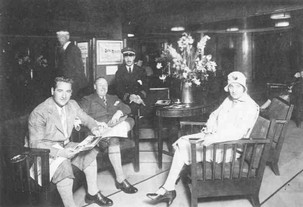 Copies of the program for his golden anniversary celebrated in America, after the sad refusal from Italy. 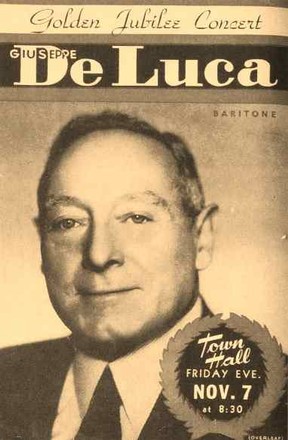 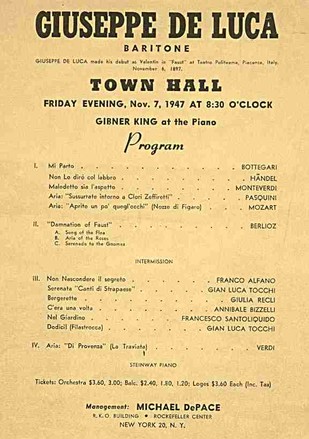