Photo of the recording of the famous interpretaion for the Victor Talking Machine Company in New Jersey, January 25, 1917 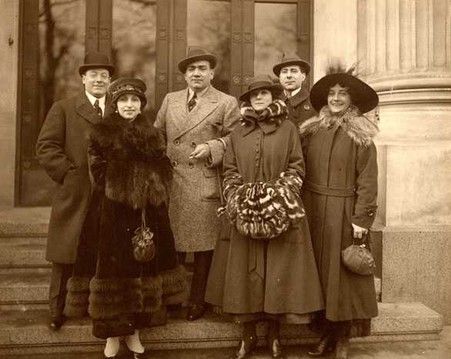 
Giuseppe De Luca's longevity on the stages of the world was matched by an exceptional wealth of discographic activity which continued uninterrupted for 48 years: from December 1902 to February 1950 (just a few years before his death). Fifty-two operas (arias, duets, in concert or in complete form), as well as 60 romanzas or songs, 14 radio broadcasts (recitals or complete operas), three filmed versions of arias and duets  from Rigoletto and Il Barbiere di Siviglia (New York, 1927) and The Pearl Fishers (New York, 1928): this is the great heritage that witnesses the “noble voice” of Giuseppe De Luca. 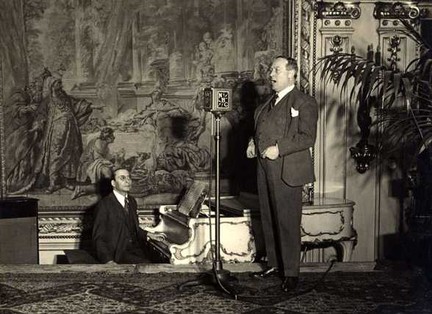 Concert on radio transmission for NBC May 1, 1932 transatlantic “Saturnia” transmitted to the American coast, at the pianoforte Mr. Vincenzo Bellezza.
Numerous remasterings and new editions of original recordings have been made from this vast corpus. De Luca made his first recording on 2nd December 1902 in Milan: Michonnet's monologue from Cilea's Adriana Lecouvreur, recorded less than a month after the triumphant world première production of the opera (Milan, Teatro Lirico, 6th November 1902). His last recording session was in February 1950 with arias from Peri's Euridice, Nozze di Figaro, Don Giovanni, Siberia, Linda di Chamounix, Queen of Spades, Falsaff and, closing a perfect circle, once again the monologue from Adriana Lecouvreur. Over a period of fifty years De Luca recorder for some ten companies: the first two in Italy (The Gramophone and Typewriter from 1902 to 1904, and the “Società Italiana di Fonotipia” of Milan from 1905 to 1907, all the others in New York. The majority of his recording appeared on the label of the Victor Talking Machine Company of New York and Camden in New Jersey, the glorious recording company which immortalised Caruso and for which De Luca recorded from 1916 to 1930. Numerous other recordings were made on other New York labels: Metropolitan Opera House Broadcasts (1932-1940), RCA-Victor (1940), Song Treasury  Broadcast (1946), Decca Records (1946), Carnegie Pops Concert (1948), Continental Records (1950).
To find one's way through this ocean of recordings one must turn to William Shaman's excellent “Giuseppe De Luca a discography”, published in 1991 by Symposium Records of Hertfordshire, England. The publication, of which there is no Italian edition, is a must for all those who wish to study De Luca's discography.

Only recently in Italy have they released a compilation box set with 4 CDs of an uncut first edition of all opera recordings.
These box sets have been produced by Francesco Sanvitale and Danilo Prefumo in collaboration with the Tostiano di Ortona Institute and edited by the Italian Discography Institute. For information on the availability of the CD set mentioned, you can contact the following email: 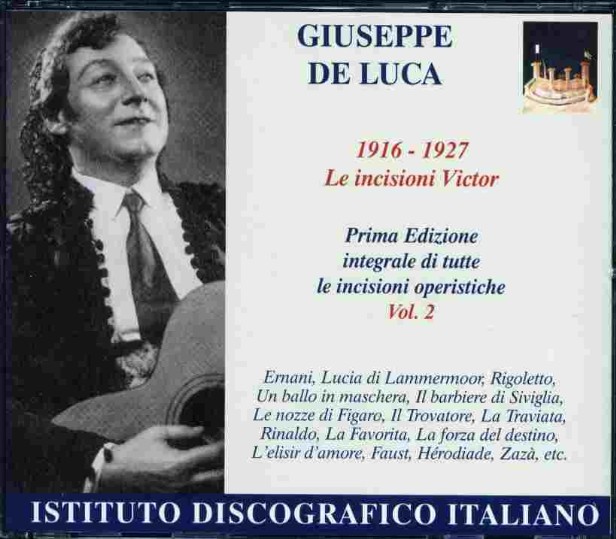 In England, Pearl's compilation in 2 editions with 6 CD's has been released 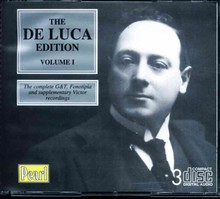 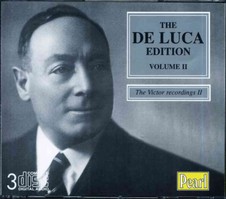 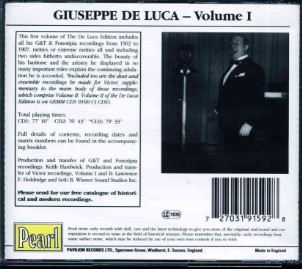 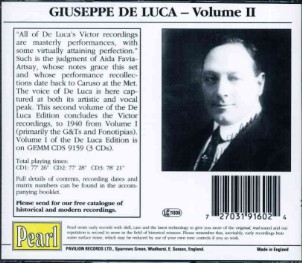